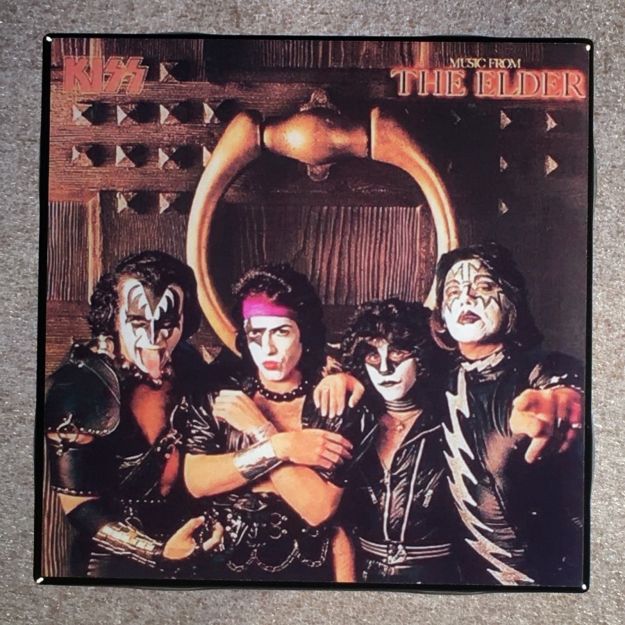 Happy Friday Metalheads!  Today we’re going back to the ninth studio album by KISS titled Music From “The Elder” released November 10, 1991. This was the last album to mark the appearance of guitarist Ace Frehley and the first time that KISS did not tour to support the album.

KISS made a handful of public appearances to promote the album including an appearance on the late-night variety show called Fridays (performing “A World Without Heroes”, “I” and “The Oath”), on Solid Gold (performing “A World Without Heroes” where you can actually see a tear run down Gene’s face in the video and “I”), and a lip-synched performance of “I” from Studio 54 broadcast via satellite to the Sanremo Festival in Italy.  Ace Frehley was absent for the Studio 54 appearance, so KISS performed the song as a trio.

The album’s story involves the recruitment and training of a young hero by the Council of Elders who belong to the Order of the Rose, a mysterious group with the sole purpose of fighting evil. The hero is guided by Morpheous, an elderly caretaker who guides the boy to overcome his doubts and become confident and self-assured. The last song on the album “I” contains a passage in which Morpheus declares to the Elders that the boy is ready to undertake his odyssey.

Often I hear differences of opinion from KISS fans about Music from “The Elder”.  Some seem to like it, others think it’s the worst album KISS has ever made and even Gene Simmons and Paul Stanley have admitted they may have not thought this album out thoroughly.

Are you a fan of Music from “The Elder”? Check out the performances below:

I – Live from Fridays

A World Without Heroes – Live from Fridays

The Oath – Live from Fridays